So triple threat Wednesday is a thing now, and our second post for today is a great Cover Reveal to drool over!

To the north of the Realms of Centuros lies the nation of Castille. From the vast cities of Aelthorn and Rheins, the wild and mysterious forests of Aranach and Derrien and the pirate-haven ports of Hightide and Blade’s Edge, Castille is home to many dangers and adventures to come. From their citadel in the Skypeak Mountains the sorcerers of the Sacred hold dominion over the realms of Centuros, forcibly inducting any they chose and punishing all who deny them.

When challenged by a fellow Guildmember, Wraith and her allies known as The Forsaken descend into the Lockwood Mausoleum, crypts that have claimed the lives of many would-be treasure hunters and graverobbers.

All Wraith seeks is to recover a single lost relic, but in the darkness of the tombs she will discover an evil that cannot be allowed to escape and a lost friend she cannot abandon. 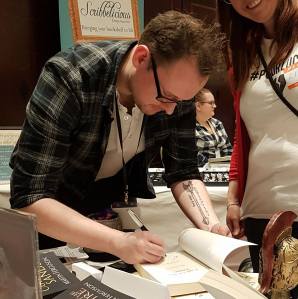 Martin Ferguson is a UK based author, a keen runner and father to two crazy, unstoppable children.

Martin’s debut series, Relic Hunters, is a Young Adult adventure series, drawing on the myths and legends of different time periods and blending them with thrill-seeking action in the modern age.

Martin’s most recent work is the Young Adult fantasy series The Forsaken, set in the collaborative world of the Hidden Realms, writing alongside NY Times best selling authors. 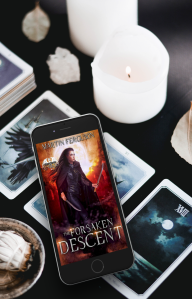